It have been called the land of the sun, because it’s difficult to imagine a more stunning sunset.
In the Sinis peninsula you could admire a varied and enchanting landscape 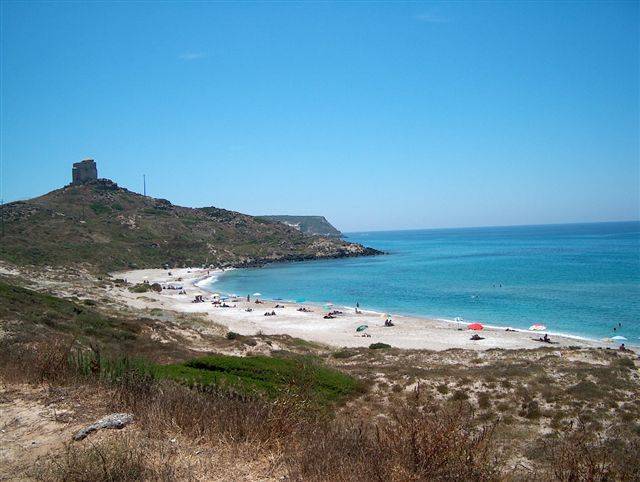 San Giovanni di Sinis with its emerald waters, the ancient Spanish tower that dominates two branches of the sea, the large expanses of white quartz moved by the water flows of Is Arutas and Mari Ermi’s beaches.

From the top of Su Pranu plateau, during the springtime, it is possible to appreciate the infinite green expanse: the gold wheat that dominates the landscape. In the distance you can see Mal di Ventre island, granitic, superb, lying in the crystalline waters with solitary and uncontaminated beaches.

In the Sinis peninsula, you will discover an interesting and unique natural, fauna, archeological and cultural heritage.

The Giants of Mont'e Prama

In march1974, in the central-western Sardinia

in Mont’e Prama area near Cabras just two kilometres from Mare Pontis pond, important nuragic sculptures have been discovered in a plowed field.

The statues are carved out in chalky sandstone and their height changes from 2 to 2.5 metres. During the excavations carried out between 1975 and 1979, a total of 5178 fragments of the statues were found.

The Giganti (Giants) have been restored in the Center of Restoration and Conservation of cultural heritage of Li Punti in Sassari. Restorers and archaeologists have brought the Giganti back to life with careful and painstaking work that lasts four years; 28 statues have been recomposed: Archers, Warriors, Boxers.

They have marked nose and eyebrows, big eyes composed by concentric circles to express power and magic.

In March 2014, a number of Giganti has returned at the National and Archaeological Museum of Cabras.

The Giganti date back between VII – X century BC as there is no evidence of Greek statues during that period, the Giganti may well be the most ancient of the Mediterranean basin. T

his archaeological discovery is hugely important not just for Sardinia but for all the geographic area between Greece and the Atlantic.

The Giganti of Mont’e Prama are the only gift offered to us by the nuragic world, and are currently exhibited at the Civic Museum of Cabras and at the National Archaeological Museum of Cagliari.

TheFarmhouse Sa Ruda Sa Ruda farmhouse is located 2 km from the archaeological site of Mont’e Prama and 7 km from the Civic Museum of Cabras.